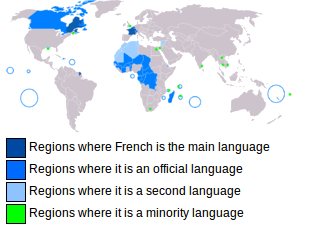 French is finishing the sixth in our “language race” with its 0.5 billion speakers around the globe after Mandarin Chinese, English, Spanish and Arabic. According to scientific research the French speaking population is growing and estimated at 700 million by 2050. So that's definitely a strong reason for us to study it at FLW.
In Europe French is number two most spoken language with more than 70 million speakers.
French used to be the language for international communications before WWI and now it remains an official language of many world's institutions like EU, WTO, ICRC.
Here's those guys from Bloomberg Businessweek have estimated the French language the third most useful language for business communication in the world. That's truly an achievement and a reason for your consideration to study French.

FLW schools of French in the countries: